GROOMING YOUR DOG, When grooming your dog, it is important to always stay calm and bring on the treats! >>

HERE’S HOW TO IMPROVE YOUR CAT’S WELL-BEING, There is a common misconception that cats are low-maintenance pets. >>

HERE’S HOW TO IMPROVE YOUR DOG’S WELL-BEING, To keep your dog physically healthy you need to prioritise quite a few things. >> 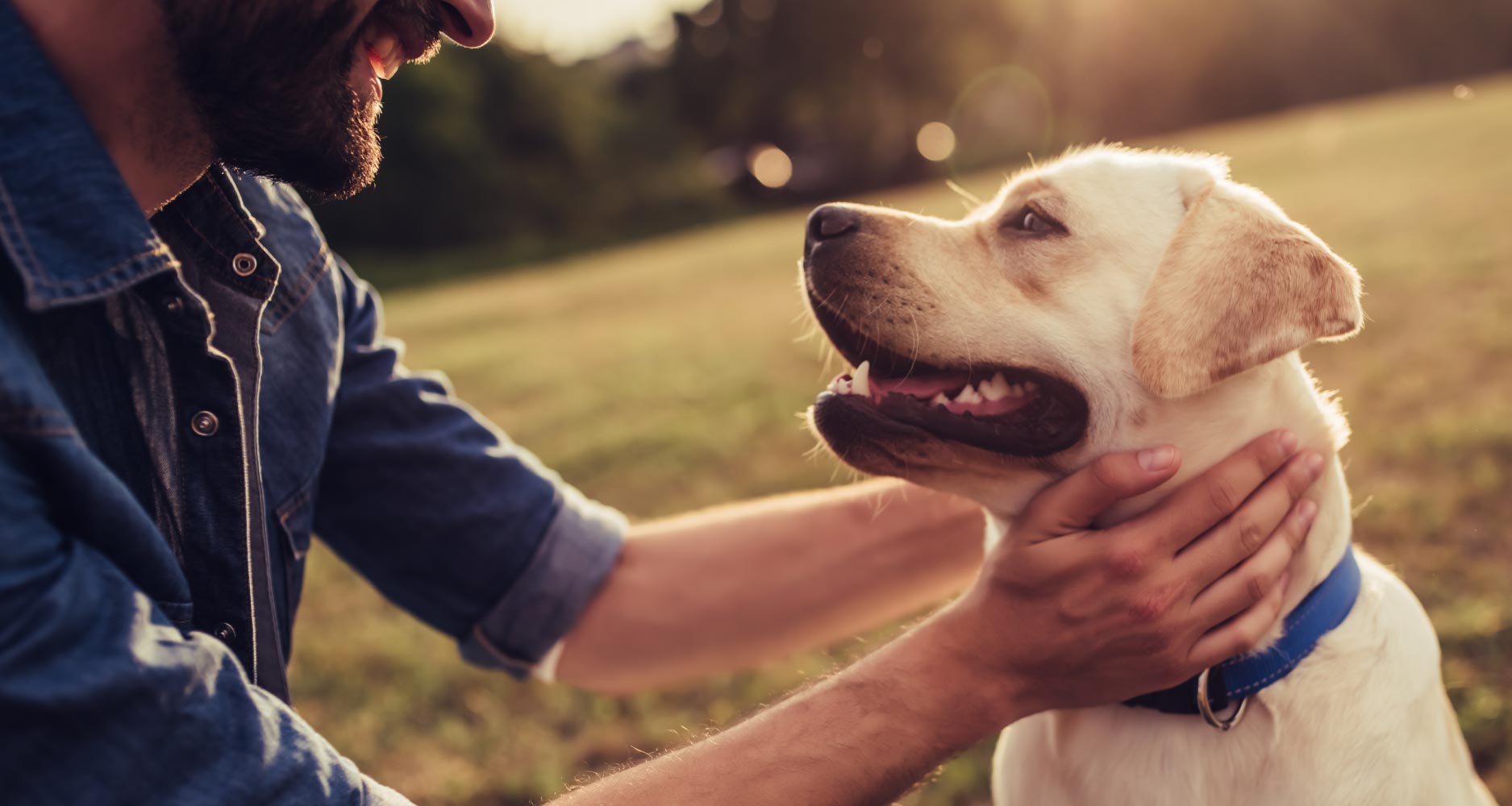 Pets, including dogs, can also suffer from seizures. They occur when there is ‘explosive’ electrical activity in the brain and are often described as an uncoordinated firing of the neurons.

Why neurons do not function normally is not understood, but probably certain substances called neurotransmitters are not in the proper chemical balance, so the nerves do not behave in the normal coordinated fashion.

Epilepsy is a disorder of recurring bouts of uncoordinated firing of the neurons within the brain. These episodes are called seizures and occasionally are referred to as convulsions or “fits.”

TYPES OF EPILEPSY IN DOGS

Epilepsy can be broadly categorised into two types: primary (or idiopathic) and secondary (or symptomatic).

Primary epilepsy: also known as idiopathic (unknown cause), genetic, inherited, or true epilepsy.  Most dogs that are diagnosed with epilepsy have primary epilepsy, where no underlying cause for the seizures is found. These dogs will be healthy and completely normal in all other respects.

Breeds most prone to idiopathic epilepsy include the:

Secondary epilepsy refers to seizures for which a cause can be determined, and there are many. 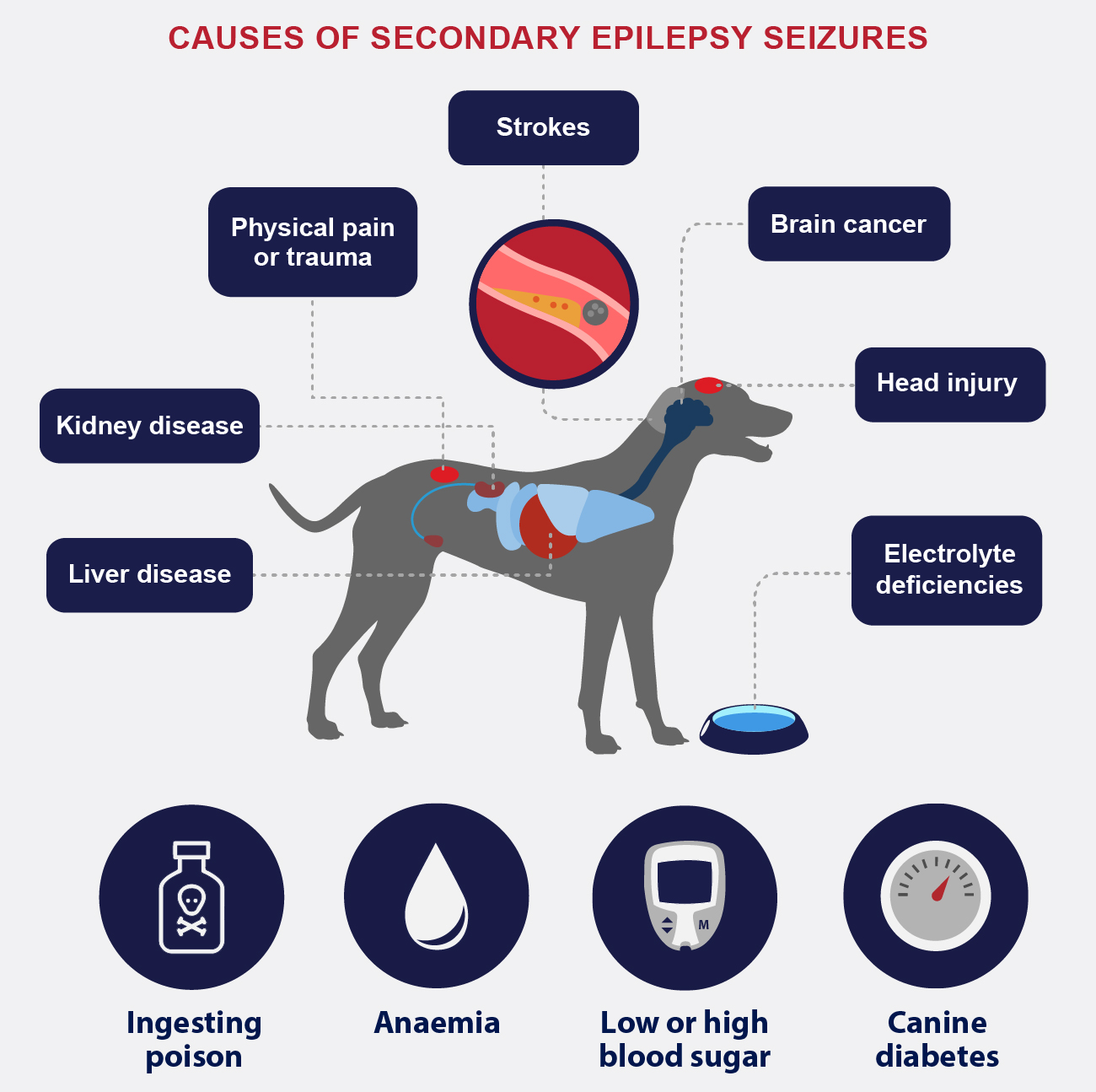 TYPES OF EPILEPSY SEIZURES IN DOGS

Based on the type of behaviour and brain activity, seizures are divided into two broad categories:

Some dogs have more than one type of seizure, and not all seizures involve convulsions. Most epileptic fits usually happen quite suddenly without warning, last a short time (often only a few seconds or minutes) and stop by themselves.

The following types of seizures describe what happens during the attack. 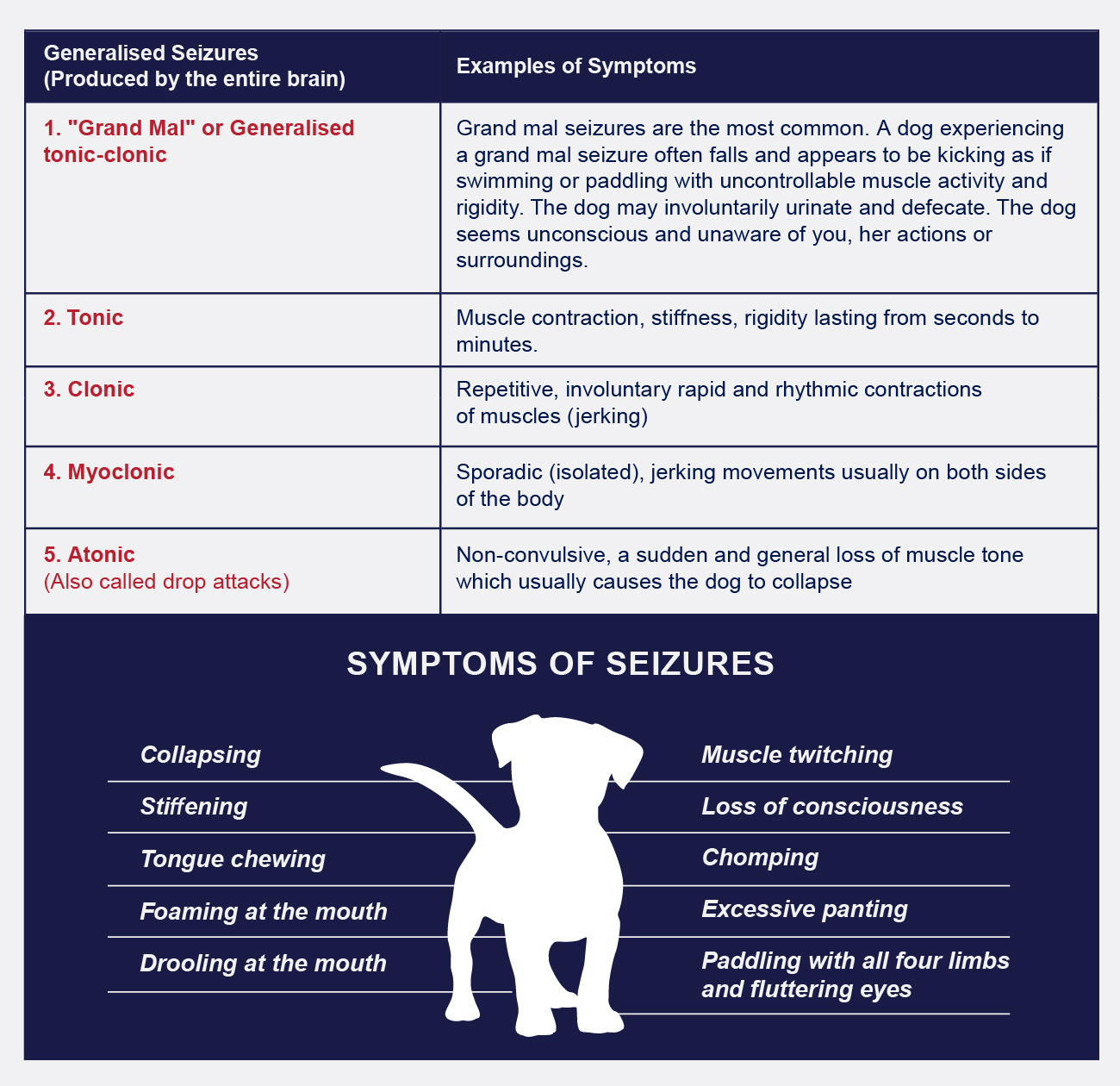 2. FOCAL (PARTIAL OR LOCAL) SEIZURES
These only occur in one half of the brain and within a particular region. How these types of seizures present themselves depends upon where in the brain the abnormal electrical activity started, and the function of that part of the brain. Focal epileptic seizures can have these symptoms:

3. FOCAL (PARTIAL OR LOCAL) SEIZURE CHANGING INTO A GENERALISED SEIZURE
A focal (partial or local) seizure can change into a generalised seizure. This is the most common seizure type observed in dogs. The focal seizure is often very short (a few seconds to minutes) and the generalised seizure follows rapidly. The focal seizure may be diﬃcult to detect due to its brief nature and it is important to tell your veterinarian what happened before convulsions started, to help them determine what type of seizure your dog is having.

What You need to know about Epilepsy In Dogs Read Now

What To Do During A Dogs Seizure Read Now